Mild Cognitive Impairment (MCI): What is it, how to identify it, and what to do about it?

The general public is aware that we are seeing the increase of dementia conditions. This creates anxiety, especially as one gets older. The fear is not unreasonable given that the aging of our population puts more and more individuals into age brackets where conditions that cause dementia are more prevalent.

While the number of cases of dementia mounts as our population ages, it is not as clear that the number of new cases for each age bracket is increasing. In other words, while the prevalence of dementia conditions grows the incidence of these conditions may be stable or declining, especially in developed countries.

Indeed the risk of dementia may be modifiable to some extent by lifestyle changes and this could lead to a reduction in incidence over time. Lifestyle changes that are thought to reduce dementia risk are nutritional improvements (eg. Mediterranean diet), increased exercise and improved physical fitness, low consumption of alcohol, avoiding smoking, improving mental stimulation and social engagement, and avoidance of obesity. Medical interventions that reduce cardiovascular risk factors are also seen as important.

While preventing dementia is a long-term goal, it is also important to see what can be done to help individuals who show early signs of (mild) cognitive impairment before progression to dementia is inevitable. Early intervention with the goal of improving the condition and preventing deterioration is the task of secondary prevention.

So what is mild cognitive impairment (MCI)?

MCI differs from dementia. While individuals with MCI have cognitive changes (usually in the area of increasing difficulty recalling recent events – episodic or narrative memory) they retain functional independence and do not have social or occupational deterioration. In many cases, MCI represents a transitional state between normal aging and dementia. As with dementia, the underlying cause may be one of many disease states. In the most common situation where Alzheimer’s disease is the cause, the condition is now often referred to as prodromal Alzheimer’s disease. About 10-15% of individuals with prodromal Alzheimer’s disease will progress on to Alzheimer’s dementia each year. Preventing this progression is absolutely crucial for the patient and for our community.

How can we identify MCI?

Individuals presenting with MCI show cognitive decline greater than expected for age and educational background. Some patients self-identify these problems but others are brought to the doctor’s surgery by a spouse or family member who has noticed changes. The most common presentation is difficulties with recalling events from the recent past. But other presentations include difficulties in finding words in conversations, problems with task planning, and getting lost in familiar situations. A colleague (A/Prof Michael Woodward) and I have developed a recognition algorithm that might assist in the diagnostic process (see below).

Once identified, patients should be further assessed, either by a general practitioner familiar with this clinical field, or by a specialist physician such as a geriatrician or neurologist, or a psychogeriatrician. Further evaluation will include a comprehensive medical history and physical examination, a more detailed cognitive examination, as well as pathology tests and neuroimaging to check for potential reversible causes. To clarify whether Alzheimer’s disease is the underlying cause of MCI (prodromal Alzheimer’s disease) it is now possible to assess for the presence of biomarkers of this condition. A positive amyloid-beta and tau cerebrospinal fluid result or a positive amyloid-beta positron emission tomography (PET) result make it very likely Alzheimer’s disease is the problem.

What can be done for MCI?

Preventing or delaying the progression of MCI to dementia is the focus of treatment. There is accumulating evidence that addressing the modifiable risk factors for dementia mentioned above can improve the outcome for patients. Up to 22% of dementia cases progressing from MCI are potentially preventable by eliminating poor diets, diabetes, and neuropsychiatric symptoms. Attention to optimal blood pressure management, cognitive training, and instituting lifestyle changes to improve physical fitness and exercise, cease smoking, and to reduce alcohol intake are all interventions endorsed by national guidelines.

The role of brain-enhancing (nootropic) medications is debatable. Both cholinesterase inhibitors and memantine are generally not recommended for MCI, with one exception. In those cases where the condition is thought to be prodromal Alzheimer’s disease, the use of cholinesterase inhibitors could be considered. Of course, conventional psychotropic medications should be used for neuropsychiatric complications such as depressive illness.

Single nutritional supplements have insufficient evidence to support them. But combination preparations including neuronal synapse building phospholipid precursors, nutritional cofactors, and antioxidants may be advantageous. A preparation of this type, Souvenaid, has shown benefit in improving wellbeing and cognitive function and delaying progression in individuals with prodromal Alzheimer’s disease and mild Alzheimer’s dementia.

Education about the condition and psychological support for patient and family carers round out a comprehensive approach to treatment. Introducing these interventions at the time of diagnosis of MCI is likely to give our patients the best chance of a brighter future. 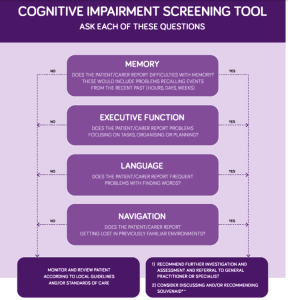